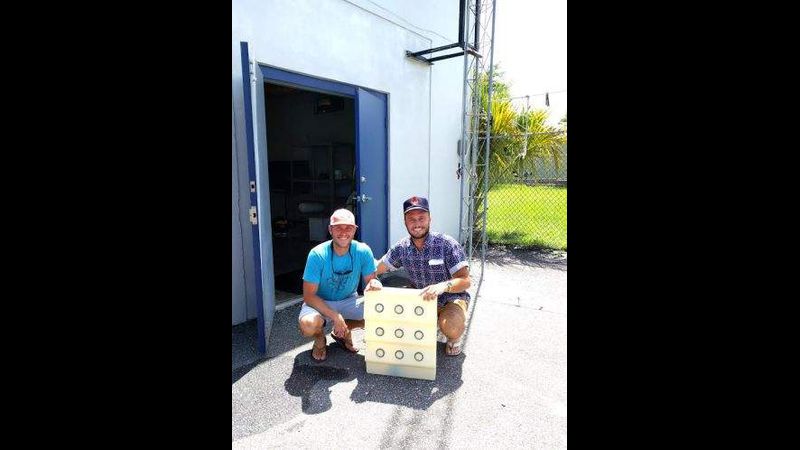 ST. PETE BEACH – Houseplants are generally quite easy to care for. With a little daily attention, water and light, they will usually take care of themselves.

But not everyone has a green thumb, and busy schedules can prevent people from giving flora the attention they need. In recent years, however, methods of growing plants have evolved. Many nurseries and gardeners use the hydroponic, or water-only, technique to root some houseplants, using only soil for others.

And new trends in irrigation conservation, energy efficiency and lighting technology have also influenced modern indoor gardening. Knowing there was a growing market in this niche, two local friends—who grew up together in St. Pete Beach and went to the same college—came up with the idea for a self-sufficient indoor gardening system, that would appeal to the environmentally conscious and might even be artistic.

Sam Secord and William Rowe came up with the idea of ​​a lightweight, portable planter that could hang on any wall – a vertical garden called Aergro.

“It’s the first fully automated, self-contained vertical gardening system for plant growth and air filtration purposes,” Secord, 31, said from Rowe’s home in an interview recently, although that Aergro Inc. has an office in downtown St. Petersburg. . “It can use up to 98% less water than other systems on the market.”

That’s because their internal irrigation design uses aeroponic gardening, a method NASA has used for years. The system sprays plant roots – suspended in the air inside the Aergro planter housing – with a mist of water at different times each day while set on a timer, as opposed to the constant immersion of the roots in water or sand, for example, as is the case with hydroponic gardening.

After three years of trial and error – tinkering, forging parts from scratch and building their own prototypes, with incremental success all using their own money – they learned what worked and what didn’t.

Now they have a final prototype ready for mass production. Their goal is to take local Aergro and introduce it to retailers, such as West Elm, they said, while also trying to introduce Aergro to area schools and local businesses, such as salons, restaurants and hotels. From there, they will assess which path is most effective in reaching potential customers.

“It took us a while to realize that aeroponics was the answer, but once we pivoted in that direction, we were really able to develop something that achieved our goals and even turned out to be less difficult. maintenance and more water-efficient than we ever imagined,” Rowe, 32, said. “From the beginning, we really aimed to develop an indoor vertical growing system optimized for modern living.”

Aergro has nine planter holes, each about 1½ to 2 inches in diameter, cut into the face of the case, which is made of UV-resistant plastic and measures about 2 feet high and 1½ feet wide. Using a maximum of 4 liters of water per month, depending on the type of plants grown and the rate at which the water is recycled and used by the roots, their “device”, as they call it, can grow plants three times faster than the ground and filters the air in a 275 square foot room over a 24 hour period using an electric timer to activate the internal misting system.

Subscribe to our free Business by the Bay newsletter

We’ll break down the latest business and consumer news and information you need to know every Wednesday.

You are all registered!

Want more of our free weekly newsletters in your inbox? Let’s start.

Explore all your options

It’s been difficult to get Aergro off the ground, and they still have one hurdle to overcome: funding for the first production. They’re ready to order the first 1,300 units from a manufacturing partner in Asia once they raise the necessary funds — $50,000 — through a Kickstarter page they launched Nov. 15. If they don’t reach their funding goal by December 15, they won’t get any of the promised money.

As is often the case with start-ups, they tried to find an American manufacturer to work with, but it turned out to be too expensive.

“The experience of sourcing from a manufacturer in the United States has honestly been a nightmare,” said Secord, who also operates a mobile marine business called Bayside Marine Management. “We contacted dozens of businesses across the United States, all of which either failed to respond to multiple quote requests or submitted a quote requiring a minimum initial order of at least $500,000. unrealistic for a startup without significant financial backing.”

They eventually found partners in China who could meet all of their manufacturing, packaging and delivery needs to the level of quality required by the unit.

Ultimately, they plan to charge $199 for Aergro. Supporters of the Kickstarter campaign will be able to purchase Aergro for $99, they said.

The couple said ordinary vegetables, herbs, succulents or houseplants can be grown from seedlings, transplants or even small cuttings. And the sleek design can be easily incorporated into any room’s decor, they said.

“There is an optimal environment for every living thing – and Aergro is our vision of that for plants,” Rowe said.

Ingenuity is an occasional series spotlighting Tampa Bay’s inventors, entrepreneurs, and innovators. If you know someone who could be the subject of an Ingenuity story, email [email protected] with Ingenuity in the subject line.